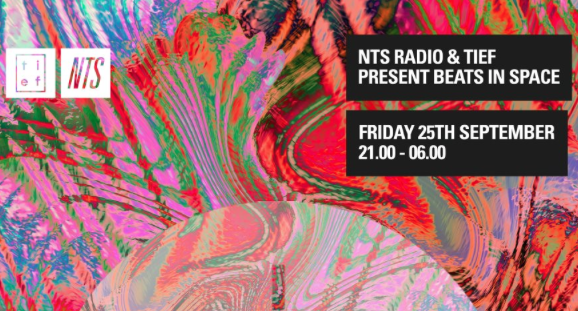 Beats In Space host Tim Sweeney has brought the weird and wonderful of dance music to the WNYU airwaves for over fifteen years. Not missing a show since a debut on the student-run station back in 1999, Tim has emerged as one of the underground’s most revered selectors and the list of guests to join him is nothing short of dizzying (think names like DJ Harvey, Mr. Ties, Prosumer and Dam-Funk). From stellar selections and unrivalled programming to the xenophobic outbursts delivered by hotline regular ‘Victor from Washington Heights’, Beats In Space has become essential listening to thousands around the globe.

Brining the sound of WYNU to the UK, NTS Radio and London-based party purveyors, Tief, have teamed up to throw a special Beats In Space event at Peckham’s Bussey Building this September. Taking over two floors of the celebrated venue, Señor Sweeney will be joined by Beats In Space Records artists Matt Karmil and Palmbomen II, while the classically trained hardware enthusiasts, Mount Liberation Unlimited, are set to bring their live show to London for the very first time. Then there’s an artist who while never featuring on the BiS show himself, has had his music played in abundance. Of course we’re talking about the inimitable DJ Sprinkles, who will join the likes of Tief residents Hesseltime and Kasra V on the night with another masterful blend of subterranean dance music. People often throw the word ‘special’ around with reckless abandon, but it’s more than appropriate here.