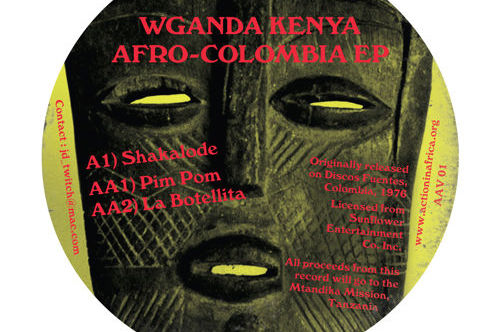 Introducing a new generation of listeners to the joys of afro-futurism and afro-centric music is an admirable feat. Give all proceeds accrued from sales to an African charity, while educating your audience in the heritage of African music and it’s impact around the globe, and you deserve a medal. It’s unlikely that the guys behind Autonomous Africa (JD Twitch, Auntie Flo and Midland) will make it onto the next Honours List, but they’ve certainly earned some sort of accolade for their work through the charitable project.

With the immense popularity of the three previous Autonomous Africa releases, the project is set to branch out further with a new 12” series. Where the label proper focuses on music at the electronic end of the afro-centric spectrum, this new offshoot will document the reach of African culture around the globe and reissue music by artists indebted to their ancestral heritage. Entitled ‘Autonomous Africa Vintage’, an inaugural 12” will explore the work of Wganda Kenya and the impact the African Diaspora had on the diverse cultural tapestry Colombia boasts today.

Imbued with a sunny disposition that could only come from living somewhere warm, Afro-Colombia EP possesses an energy capable of lifting even the dampest of spirits. Giving their own take on an afro-beat classic, the opener sees Wganda Kenya drag Fela Kuti’s ’Shakara’ through the backstreets of Cartagena. Moving on, and Fela’s influence is also felt on the the riotous ‘Pim Pom’. Shuffling along to a marching rhythm synonymous with the Colombian genres of cumbia and champeta, there’s a hint of the afro-beat master’s unruly eccentricity coursing throughout. Slowing things down for a more traditional take on Colombian music that combines jaunty accordion and singalong vocals, even ‘La Botellita’ is underpinned by some Afro-centric percussion.

With Afro-Colombia EP, Autonomous Africa expertly showcase the vibrant sounds of Colombia’s Caribbean coastline, but also enlighten listeners to the influence of African culture around the world.

The Afro-Colombia EP is released via Autonomous Africa in April. All profits from record sales go towards the Mtandika mission in Tanzania.