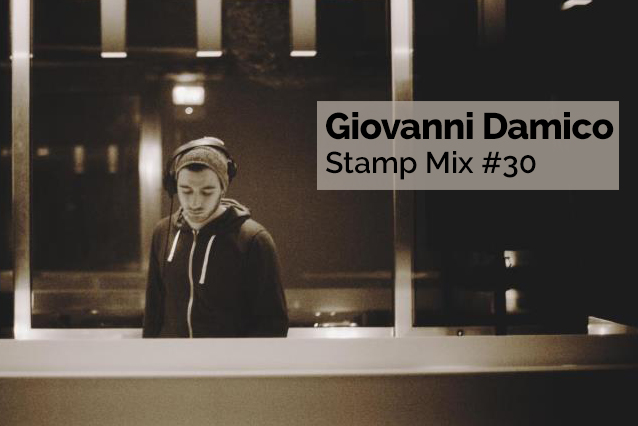 When it comes to underground house scenes in Europe, we hold our hands up in not knowing too much about Salerno, Italy. That said, one of our discoveries of 2014 hails from the city and is making us sit up and pay this small city a lot more attention. Giovanni Damico is a self-taught musician, DJ and producer who also runs his own imprint White Rabbit Recordings, named after his brother’s bar in Salerno. Over the last year he’s been quietly putting out a series of stellar releases for Fresh Meat, Seven Music, Geography and Landed, with Darwin’s Theory (released on the latter) really catching our eye a few weeks ago. Sample-based house, ranging from the soulful and balearic to 4/4 dancefloor killers is his game and we very much want to play ball. For his Stamp Mix, Giovanni has taken the opportunity to show off his more soulful and funky side, opening with some classic William Onyeabor and not taking his foot off the pedal throughout.

Download the mix and read the Q&A below. Tracklist coming soon to our Soundcloud.

Hello fellas. 2014 started with my move into a new home/studio in which I finally found the space to position together all my gear, record collection and my lovely dog. Now I have everything I need to dedicate myself to do what I love most.. music! I also released the first records of the year, two EPs on the English labels Seven Music and Artful Division.

We read that you’re a self-taught musician. Can you give us a bit of background to your musical upbringing and how you’ve got to this point in your career?

I was born into a musical family where music is the daily bread. My father is a classical musician who kept me in the cradle while giving piano lessons to his students, so my interest in music was inevitable. The problem was when I realized I was more interested in electronic music, against the will of my father who refused to assist me. Then over the years I have learned by myself the use various instruments, like the piano! It’s called adaptation, one of Darwin’s theories 🙂

Can you pin-point three records that have influenced your sound in a big way?

I’ve been influenced by all the music I’ve listened to in my life, so it’s hard for me to identify only three. For sure these are the ones that changed my existence:

Much of your music is sample based. What makes a particular samples stand out to you? Are there any examples of others working wonders from a sample?

Sampling is one of the cornerstones of electronic music and that’s makes it so beautiful and engaging. In the list above, I mentioned Moby – Natural Blues. Well, in this track the main sample is Vera Hall – Trouble So Hard, above which the producer develops the whole arrangement of the song. Most of the time I work like this – from a sample that I like to build an entire arrangement.

For us, Darwin’s Theory is your standout track. How did that track come about? Can you give us an insight into the sample you used and what the track means to you?

Darwin’s Theory is one example of my musical evolution and maturity where the focus is no longer only the club, but the soul and the pure pleasure of listening to music. I always had a parallel activity of production in which I do various kinds of music from funk, soul and hip hop and that track contains a bit of all those genres. Samples used are from Mahalia Jackson – Trouble In My Way (vocals) and Porgy & Bess – Summertime (flute jazz version).

We’re not too familiar with Salerno’s music scene. What’s it like for house and underground music in general, and where does what your doing as an artist, DJ and label boss fit into the music landscape?

Salerno has a movement of underground music for almost 20 years, although it was always restricted to a minority of people. Fortunately, in recent years this kind of music has began enjoying more success and more promoters have emerged, including Salerno in Kult – where I’ve had the pleasure to perform – and Unibeat – who have had DJs like Octave One, Gold Panda, Roman Flugel, Dasha Rush, Francesco Tristano, Nathan Fake play, in front of thousands of spectators. Here’s a video of this year’s event (with me playing at 2.25)

Could you give us an insight into White Rabbit Recordings? What motivated you to set it up and what ethos do you run the label with?

White Rabbit is my brother’s american bar in Salerno, where we’ve organized small underground events with me and other local DJs. It’s a piece of my heart and so I decided a record label to it with the only goal to release underground quality music, far from market, big names, merchandising and compromises. We just want music with a soul and it could also come from an unknown artist, we don’t mind.

Is it right that you DJ exclusively in vinyl? No doubt many of your bookings come from outside Salerno, which means a lot of heavy lifting around Europe! What is it that you love about vinyl that keeps you hooked?

Yes, that’s right. Vinyl is the format I prefer and I’ve been in love with it since I was a child and started DJing. Vinyl it’s the only format that permits you to touch the music and give you a sense of ownership. For international bookings I can’t always bring my records and I always have some CDs or key in another bag for playing some promos or unreleased works from me. Moreover I can’t risk to not play if the airport loses my bag 🙂

What are you three favourite records of 2014 so far?

Really don’t know which ones, i bought lots of records but most of all are from the past years. The only one that comes to mind is last Moodymann LP on KDJ Records.

What three tracks can you see being big hits during festival season this year?

Of Course my new Records! I can’t give you an answer because usually I don’t like the hits everyones plays, it happens very rarely. I just buy music i really like and want to play and always hope that these records don’t become hits so people won’t be tired of hearing them.

Tell us a bit about the mix you’ve put together for us.

I recorded this podcast at the studio of one of my best friends with 2 Technics 1210 and an Allen & Heath XONE 42. I selected some great vinyl records I love, to share with you my funky/house soul.

As for standout tracks, of course one is from the mysterious Nigerian musician William Onyeabor – Body And Soul and the last one from the master Moodymann – Shades of Jae. In the middle of the mix (30:00) you can also check a new track from an Italian artist called Giovanni Damico – Balboa Jab (7LTD05). You know him? 🙂

Do you have any exciting plans for the summer, release or bookings-wise? Or will you be taking some time out?

Music never goes on vacation for me and so I will continue to work on my projects, but you never know…maybe i’ll go to the sea sometimes with my girl!