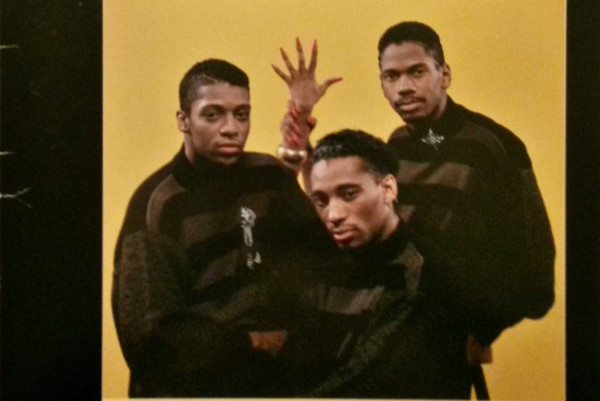 Men From The Nile producer, Marshall Jefferson collaborator, ex-Strictly Rhythm A&R, prior Phuture member and formerly behind the counter at Traxx Records, Roy Davis Jr is one of the Chicago house greats, front and centres of his city’s musical developments over the last three decades. We got a sample of this DJing prowess earlier this year for his Stamp Mix 92 and now he picks his favourite record sleeves with a strong Chi-town theme, interwoven with stories of growing up in the Windy City.

Listen to Roy’s favourite track off each record below on Spotify or on Youtube.

What was the first record you bought or listened to because of its record sleeve?

Bootsy Collins’ Player Of The Year album. My older cousin had it at first and he was walking around with these funky star-shaped cut out glasses burning incense in his room bumping this funky Boosty record. I asked him where he got the glasses from and he told me the album cover of Boosty. He showed it to me, I thought it looked cool so I remember begging my parents to buy the album for me. So there I was, a young kid bumping my first Boosty album with a free pair of star shaped glasses walking around the house thinking I was Boosty Collins, starring at his cover with the superstar glasses on the front cover.

How important a role do record sleeves play when you’re buying records?

As I matured as a music lover and DJ I became more attracted to what the music was all about. I would pick up covers then hear the music and the music wouldn’t catch me like the cover so I kind of moved passed that a lot throughout the years. It’s like the old saying don’t judge a book by its cover. If you can have the most simple cover and the music is good, then what does the cover matter? But on the other hand the cover could draw you to the unheard music to make you want to listen. So it’s great for marketing and reeling the consumer in for the listen or purchase.

How have you approached the artwork for your own releases?

Some of my albums are or have been more artist based in the sense of having more facial recognition. Now it’s more about how I’m feeling after the album.

Any key principals or things you’ve kept in mind?

Yes, how will this album look in the future 10 or 15 years from now? can it be a t shirt or wall poster? will people remember the song because of the cover?

The cover on this one always stood out in my crates because of its brightness and colored woman of gold, melted to give it a sort of sun like glow. The tune on this Ramseys album was ‘Sun Goddess’, which always reminded me of being in Chicago Heights in the basement with my uncles jamming out with the incense burning, with cool red light bulbs and all of us playing congas to this jam.

Nothing about this cover really ever stuck out on this, but the branding of this group name spoke for itself weather you could appreciate their music or not. Chicago the brand said who they were. This was one of those Chicago groups that shows up in my mind every time I take a long road trip. It seems to be played on those stations in the car when only one station works in the car while you’re driving across country in the states. So you end up remembering every lyric.

Favourite track: ‘If You Leave Me Now’ This was a time when every up-and-coming producer wanted to be like Marshall Jefferson and Ten City living in Chicago. My first group I did was co-produced by Marshall, which was huge for me at the time. Being a young kid watching these guys work in the studio was an amazing time.

A piece of house music history right here with house music heroes all in one band: Robert Owens and Larry Heard. ‘Distant Planet’ was one of my old favorites from this crew. It made us feel like we were in another world when this came out. This first time I heard this played out was at a spot called Sauers when Amando Gallop dropped before it was out and everyone went bananas! Being a spacey type of guy this cover fit his music for this particular album. Simple but to the point. GU one of our hometown realist dudes ever to do this house ish! ‘May Detroit’ is one of those funky house rhythms from Atmosphere that stands out with that solid, sick thumping bassline, escalating frequencies and Chicago-style kick drum and swinging hats. It just does something to me every time I play it. It flashes me back to the days when me, Glenn, Steve Poindexter, Jay Juniel, Brian Harden and Ron Carroll all worked at Traxx Records at the same time. Watching all my friends grow up in the game and becoming stars in their own light makes this house music game worth it! This joint was a staple track from Kanye’s first album that was making a statement of what a lot of us felt inside and wanted to say coming from from the Chi at that time. I remember when I first heard this on the net before it came out. I was like “wow! This is fire, how am I going to play this at the club on the house scene, because the world needs to hear this.” So I made my own house version of it to play out. So I will always stick in my head as one of the first house DJs to play Kanye’s music on a house dance floor. On this record I just remember Common doing his thing like he always does. The vibe was just in the pocket with The Soulquarians on the production on this entire album. The cover had a statement of what we have gone through in America and still go through, which made this cover stick out to our culture.

The cover on this one said it all if you just look into the peace symbol they have on there. This tune reminds me of backyard bbqs with my family in Harvey, Illinois. I remember this tune would go off, then my mother would run back over and start it over again, the record never ended it seemed like. Lol

Favourite track: ‘There Will Never Be Any Peace (Until God is Seated at the Conference Table)’ A train and the group painted picture on this one to symbolize and show the group’s identity. One of Curtis Mayfield’s first big songs he wrote coming from Chicago had the neighborhood excited before I was born. Every time she played the record for me and my sister, my aunts use to tell us about growing up living next door to the Mayfield’s family in Harvey, Illinois. I heard this tune so much I did a cover of it on Ubiquity records. His cover on this one was art simple, with trees and pyramids and the sun on top with vibes of life. Just one of my favorite pieces from Terry Callier I can appreciate. Being a Chicago folk soul singer I had the opportunity to work with R.I.P. to a brother filled with so much wisdom. The things I learned from the short time of working with this spiritual Godly man.