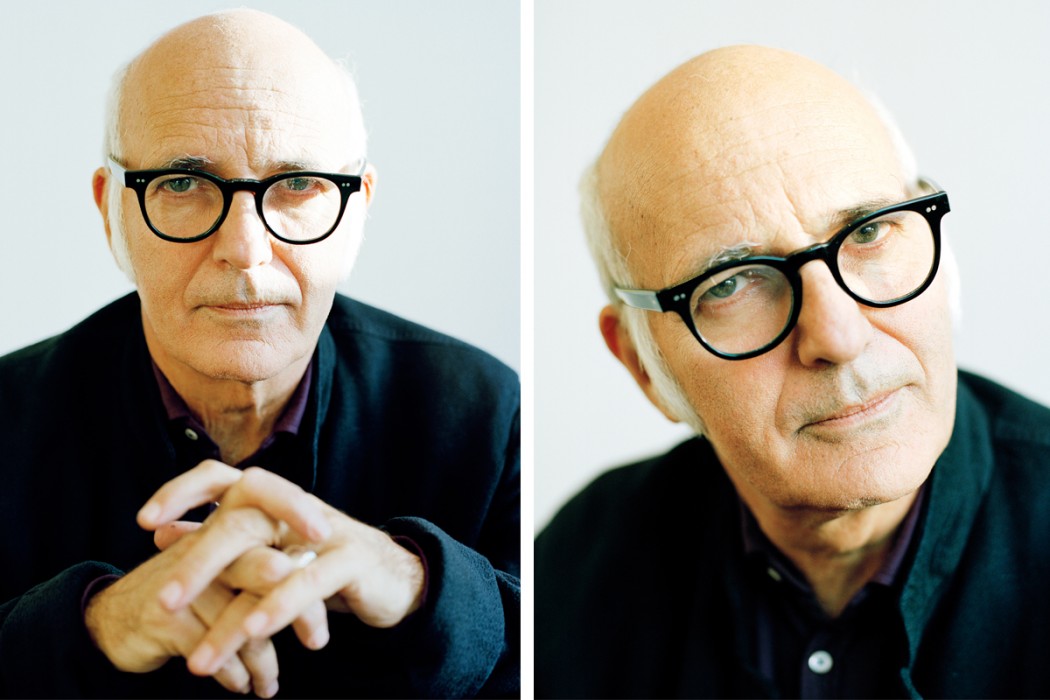 Befitting our plush Kensington surroundings at the Classical Decca offices, Ludovico Einaudi arrives dressed in a brown tweed blazer, fitted shirt and his trademark thick-rimmed spectacles; a personification of sharp but tasteful Italian style. He greets me with an earnest handshake and welcoming smile to catch me up on his stress-free journey to London.  Like his calming and evocative music, there is something immediately comforting about the composer’s presence. Yet, I was to discover, beneath this cool exterior lay an individual whose restless creativity, willingness to experiment and open-minded, spiritual outlook towards music, has helped to create one of the most popular classical composers of our time. With his latest album Elements reaching No. 12 in the official pop charts – the first time any composer has reached the top 15 in over 20 years – Einaudi is clearly something of a phenomenon for classical music, unprecedented in contemporary music. He attributes this unique ability to connect with a variety of different music fans to his childhood, where his family introduced him to a plethora of musical styles and genres. “My mum was a classical pianist who loved the works of Bach, whereas my older sisters adored the popular music of the 1960s – Hendrix, The Beatles and The Rolling Stones. We often used to play music together and sing, especially folk songs from France.” It was clear to see how fondly he remembers this early introduction to classical and the classics of the time.

At 20, studying classical composition at the prestigious Conservatorio Verdi in Milan, Einaudi was adamant he did not want to abandon his passion for popular music. “Often I could not find the range of emotions in classical music which I found in the The Rolling Stones and Hendrix”, he explained.  “Listening to Bach, I found a deep spirituality and felt elevated above the human level. Yet the feeling and emotions attached to popular music speak to us far more personally, and I couldn’t leave that behind.” And here lies the key to Einaudi’s popularity and distinctive appeal.

When Einaudi first started composing he recalls “wanting to mix the simplicity and honesty of contemporary with the refinement of classical.” His most famous works – ‘Una Mattina’ for example – bear all the drama and tension of a classical piece, but there is an undulating innocence and simplicity to the composition, which makes it palatable to a wider audience. Younger listeners, with an appreciation for contemporary sounds and trends, may never relax to Mozart or Bach, but feel much more comfortable with an Einaudi album.

We continue our conversation in a reflective mood as Einaudi talks about the people and experiences that have helped shape him not only as a musician, but as a human being. He talks with particular admiration for Luciano Berio, his teacher at Consertorio Verdi. “In your 20s you need a guide and support, there were times when I suffered crises of confidence, where everything I produced didn’t seem quite good enough”, he elaborates, “however Berio helped me through these tough times by believing in me as both human being and a musician”.

Working in collaboration with Ballake Sissoko on their 2003 album, Dinario Mali, and meeting Toumani Diabate in Mali, also made a huge impression on Einaudi. “The music of Mali is inspiring. For 400 years, every generation has learned the Kora, a 21 string ancient African harp which – when played well – produces the most beautiful, serene sound. Toumani Diabate is now playing with his son Sidki who’s giving the culture a new light and voice”. In many ways, Mali’s Kora compositions are very similar to Einaudi’s own works: classical in spirit, yet with an uncomplicated innocence that allows them to be valued by a wider audience.

Aside from his work in Mali, perhaps the most notable of Einaudi’s collaborations has been with filmmaker Shane Meadows on This Is England, which began in 2005. Reflecting our own lives and friendships, the characters of the programme have changed irrevocably since we first fell in love with them a decade ago. From the bleak Thatcher years to the ecstasy-fuelled hedonism of the 90s, we have watched Sean, Woody, Lol and the rest of their motley crew grow up, fall in (and out) of love and form life-long friendships. As these colourful characters grow and encounter new experiences, their lives swirling theatrically from dazzling highs to crushing lows, a constant force has always remained. Einaudi’s stirring and evocative music has helped elevate the show’s most dramatic and painfully sad moments to an even greater emotional resonance.

Einaudi speaks of Meadows with huge admiration and respect. “I trust him completely and I gave him full control. I sent him through all the versions of possible music to use and he placed it where he wanted. Meadows really has a unique and instinctive ability in combining music and imagery.” After ten years of this fruitful partnership, Einaudi was invited to join the cast and crew on the set of the latest series as they wanted to share the milestone with the composer whose music has often provided the emotional heart of the film and subsequent TV series. Like esteemed British filmmakers Ken Loach and Mike Leigh, Meadows genius lies in his ability to create worlds and characters that feel completely authentic and this didn’t go unnoticed during Einaudi’s visit. “It was fascinating to meet the actors, who are very similar to the characters they portray”, he recalls. “The set was also identical to the one used in the programme. Everything was so real.”

Away from This Is England, Einaudi has been busy this year composing material for his album, Elements.  True to its title, it was inspired by “reanalysing the elements that create a piece of music – the harmonies, the melodies and colours – and to have a different approach towards composition.” This revised approach can be heard in the hypnotically beautiful ‘Twice’, which explores new musical territories for Einaudi, yet still retains his signature ineffable sound.  Kandinsky’s writing on the function of art and the elements of the periodic table also provided a rich source of inspiration on Elements. “Music is an intrinsic part of life, therefore it is important to transport different forms of artistic expression, science and mathematics into compositions”, he explains candidly.

Much like previous albums, Einaudi continues to explore electronic sounds on Elements and, while attitudes are certainly changing, some traditional parts of the classical world still struggle to embrace these contemporary sounds; an outlook that Einaudi wants to help dispel. Coming from a man well-versed in Kandinksy, his philosophical approach is unsurprising. He believes it’s a part of life that  “we live in highly advanced electronic times”, and the tools at our disposal should be utilised to improve music. “Sometimes you cannot produce a specific sound you want with say a guitar or piano”, he continues, “and you simply need to use electronic elements.” For Einaudi, as long as the music is interesting and speaks to him personally, it doesn’t matter where it comes from or how it’s made.

The Italian composer contends that everyone has the ability to share his open-minded approach and engage with music that is not immediately familiar. “There should be no boundaries in your relationship with sound. Often it’s not about the music itself but the context in which you hear the music. For instance, listening to a piece of classical music in a film you love often changes your perception of it entirely”.  Personally speaking, my love of cinema has certainly helped open my own mind to the world of classical music and composers like Jon Brion, Strauss and Thomas Newman.

As he has become one of the world’s most famous composers, Einaudi’s own relationship with music has changed over the years. He confessed that a busy touring schedule and continuously working on his own compositions makes it harder for him to fully engage with new music.” I used to listen to an album in its entirety, but it’s much harder to be attached”, he revealed. “I don’t know if it’s me or contemporary music no longer inspires me.” He’s not alone in his disengagement though and it’s symptomatic of a wider trend and collective malaise in how we consume music in the 21st century. Unlike past generations who had little option but to listen to an album from front to back on a record player, the majority of us are no longer willing to fully engage with an album unless it provides us with an instant sense of gratification. Even Einaudi himself concedes that, “if the music doesn’t give me what I am searching for immediately I often turn it off after a minute.” Yet, with hindsight, he admits that “there are still times when I should have spent a longer time engaging with the music.”

Although Einaudi struggles to engage with a lot of contemporary music, he still holds a particular affection for the seminal British band Radiohead. “I admire their restlessness and their continual drive to innovative and produce radically different works”. As a band who initially found success in angsty 90’s grunge before turning to electronic music, their influence on Einaudi’s open-minded and philosophical approach is clear. From his work with Ballake Sissoko in Mali to his recent collaboration with electronic trio Rococo Rot, Einaudi shares a particular affinity with the Oxford band, in his continual desire to innovate and seek out new creative experiences.

Over nearly two decades in the business, it’s heartening to see his child-like inquisitiveness continues to burn as bright as ever. “After I finish my tour in support of Elements I plan to start my new projects. There is still so much to discover and the more I write, the more I become curious”. With his work now remixed by DJ Tennis, Starkey and Mogwai, I take things one further and ask if we will ever see him making dance music in the future? As ever his response is both thoughtful and heartfelt. “I never say no or yes. I just listen to how I feel and follow my emotions.”

Catch Einaudi on an extensive European tour throughout 2016. For full dates head to his website.

Photos shot exclusively for Stamp The Wax by Lewis Khan.