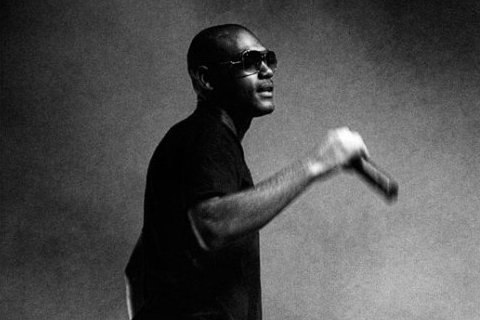 Kano’s performance lived up to all expectations – flawless and dynamic. His explosive entrance was the warm return his die-hard fans had been waiting for and swiftly riled up the masses.  To beef it out more there was a surprise appearance from JME who came on for ‘Flow of the Year’, while throughout the night the Butterz MCs kept the crowd ablaze. Rings were formed and fist pumping was of the calibre that gets you tennis elbow. It was a proper celebration of UK grime and the big man’s return to the stage.

Following that sweaty start it was time to start delving into the other quarters. It was great to see Hoya Hoya’s warehouse-esque room 2 about as filled as room 1. With the DJ booth being set to the side, the crowd were treated to a trippy lights display and bopping Street Fighter characters in front. Kahn was the first up, repping Bristol with aplomb. His set was filled with classic dubstep tunes blended with some of his Bandulu work with Neek and finishing up on the Happy Slap Remix of Hi5ghost’s ‘Kung Fu Kick’ – another of the night’s many highlights. It was a noticeable shift in tempo and vibe from Kahn to Kutmah but not unwelcome. The hip hop/beats connoisseur, had a less direct approach than Kahn yet boasted the breadth of Hoya Hoya’s sounds on offer.

Tucked away up some spiral stairs were the Keysound lads in a Room 3, which had a questionably positioned DJ booth in front of two walls that split up the room and diminished the atmosphere of intimacy that you look for in a smaller room. Fortunately the track selection from Dusk & Blackdown and Wen b2b Parris was on point – plenty of sub and little else! Pinch & Mumdance’s  ‘Turbo Mitzi’ came in early doors, and a curveball came later in the form of Hodge’s ‘Mind Games’.

As anticipated ,the sheer volume of quality artists playing meant that it was a struggle to catch everyone. Moreover, for the artists themselves it resulted in some getting too little attention but it was a night for popular grime and it certainly had its say. 2015 should have more of the same in store for Kano and the Butterz gang.