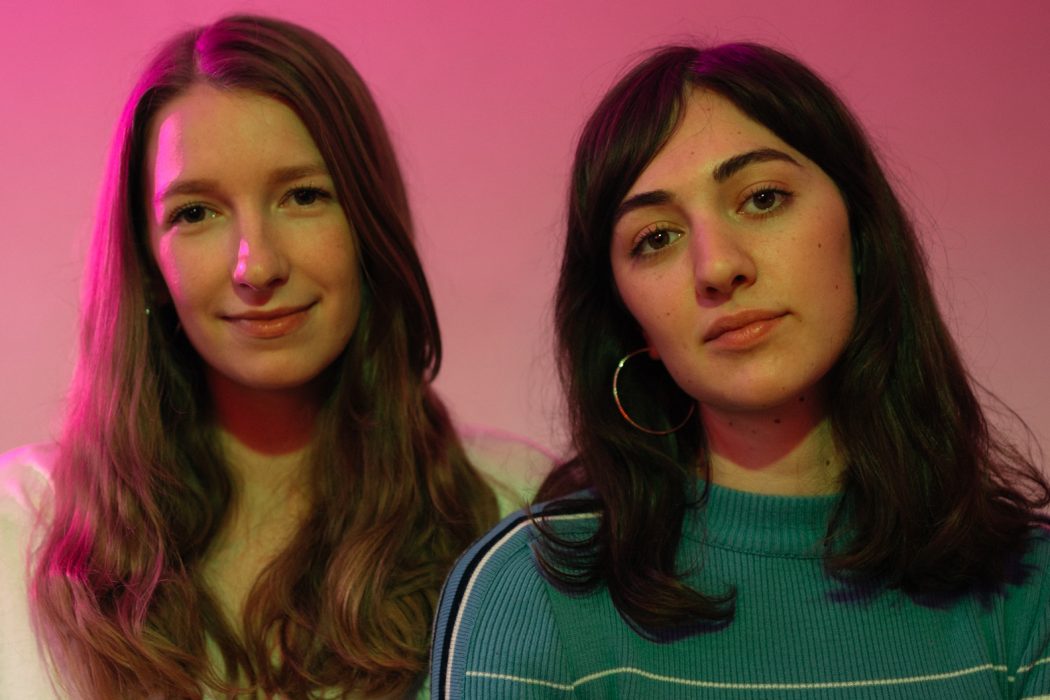 A mutual friend and long conversations about similar musical interests brought Rosie Cain and Nadia Anderson together. First it was as ATLAS, born on a whim as a radio show, but as their sound together was refined, so too was their name. Kiara Scuro represents a more uncompromising, darker approach and something they’re much more confident with as DJs.

As part of a series profiling the 2018 recruits for Dimensions Festival’s DJ Directory, we speak to Rosie and Nadia in their first online interview about what’s moving and motivating them, alongside a first listen to an absolutely unrelenting mix. For more info on last year’s Directory DJ’s check our Frequently Asked Questions feature.

What’s been your musical upbringing, self-taught, schooled or otherwise?

Rosie: I’ve been quite lucky to grow up with music always around me. My dad used to be in the Radiophonic Workshop way back, so there were a lot of weird sounds floating around when I was young. My stepdad was my introduction to jazz and blues, my mum showed me disco, and my mum’s current partner, who used to run a record shop in my hometown, pointed me in the direction of more techno and electronic stuff. Even though my upbringing has been saturated in sound, a lot of it has been my own schooling too, particularly in terms of discovering new sounds, artists and learning to DJ. Unfortunately I can’t play any instruments, feel like I missed a trick there…

Nadia: I actually think my love of music stemmed from dance, that was my main passion when I was younger. My mum was dropping me off to classes nearly every day of the week from the age of five and I was exposed many different types of music. I went to boarding school at 11 and had to stop a lot of my classes, but music still continued to be a big part of my life there. My oldest friend Tatiana is an important part of my musical upbringing. We’ve shared the same journey since our school days. We went through many different phases from Blink 182 to Pretty Ricky! She’s actually the first person I ever played a set with, she’s an awesome DJ.

Can you think back to a key moment that made you want to take music seriously?

Rosie: Probably when I got my first writing gig for Magnetic Magazine. Believe it or not I used to do a grime chart for them. Before that during university I thought I was going to go into acting, that’s what I trained in. Journalism was my original outlet for all things music related, but looking back I wish I’d pursued DJing earlier. I think I was too nervous to give it a go for a long time.

Nadia: I think music was always an industry I was interested in, but I never really knew exactly what I wanted to do. I don’t think I had a moment where I decided it was something I was going to pursue, I just naturally gravitated towards a circle of friends who loved music just as much as me.

Rather than focusing on a specific sound, is there a key principle or philosophy that drives you as a DJ?

We want to thrill and surprise people. And each other! It’s amazing to have someone so close to get excited over tracks with. One of us will play the other something and then we’ll geek out about it. It’s special to share that. It’s the same for our sets. Sometimes we play separately but it’s never as fun as when we’re together. We spur each other on and get each other gassed.

Musically, it’s finding songs that stop us in our tracks. Songs that are dramatic, surprising, tension inducing. Both of us grew up listening to indie and guitar bands and a lot of the music we listened to then has an impact on what we play now.

Our mix takes in some of those influences, some new wave, synthwave through to heavy demonic EBM. It’s full of songs that excite us at the moment. We wanted to show the breadth of our sets and how heavy we can go, when the time is right! There’s some unreleased bits in there from Blind Delon, Desert Sound Colony, Tin Man and our homeboy Jake a.k.a Pris. We’d say our tastes aren’t for everyone but they are true to us.

Before Kiara Scuro came ATLAS. How did you two first meet and what made you take up musical partnership together?

Nadia: My good friend Theo is Rosie’s other half and we owe him the world for introducing us! Whenever I’d hang out with Rosie we would get into lengthy chats about music and quickly found that our tastes were very similar. The whole radio thing was really spontaneous. I was interning at Red Bull Music and was contacted by Reprezent Radio for something work related. I acted quite impulsively and asked Adrian, the station manager there, if there were any openings for shows, even though I had no radio experience at all. Next thing I was messaging Rosie with the idea of starting a show, and of course she took no persuasion whatsoever!

Rosie: Yeah, I think we are very lucky to have found so much common ground musically, as we didn’t grow up together and develop our tastes together. We came at it knowing what we liked and what we wanted to play and it just happened to work!

What prompted you to change to Kiara Scuro and what’s behind the new name?

When we started radio we were playing more “palatable” sounds. We were still figuring out a sound that was really us and that we didn’t have to dumb down or hold back on.

We wanted our name change to reflect that. Kiara Scuro comes from Chiaroscuro which is a renaissance painting technique; the treatment of dark and light shades. We felt that kind of represents where our sound sits and, at the time, the ATLAS name was pigeonholing us a bit in terms of bookings. Saying that we still love the music we played as ATLAS and we still play sets where we embrace our more melodic and downtempo tastes.

Has the switch been good to you? Do you feel you’re able to express yourself better with a new identity?

Definitely! We had some pretty strong opposing opinions from people about the name at first, but we expected that. We were more excited about the kind of sound we had started developing. We are a lot more confident in ourselves under Kiaro Scuro, we guess because we’ve found a direction we want to go in that feels completely us.

Outside of Kiara Scuro, is there anything you do individually that feeds back into what you’re doing collectively?

Rosie: My work at STW definitely feeds into what we do together. It’s pretty strange being on the other side in this interview haha! I’m very lucky to have tons of great unreleased music pass through my inbox every day for one, and on top of that I have made some amazing friendships with other like minded people.

Have there been any people or collectives who have empowered you or helped you find your feet as individual DJs and as Kiara Scuro?

Tons! We’re very lucky to have such supportive friends around us, some who’ve also given us amazing opportunities, Dimensions and STW included. Reprezent gave us our start on radio, Worldwide FM allowed us to explore different sounds and Balamii let us champion our darker and leftfield tastes.

Rosie: My best mate anu (who is also one of my favourite DJs ever) inspired me to play the weirder end of my collection and embrace the sounds I’d previously kept to my headphones! Andy Lemay, for the continued support and always being gassed for us. Also big love to Theo, Sean, MLE, Banoffee Pies, Semi-Peppered and, of course, yourself Aaron!

Nadia: Some of the names Rosie mentions like Andy and Theo have given me a lot of confidence in myself. Without sounding cheesy my other half Lev, who head’s up the bookings at The Jazz cafe, has definitely helped me find my feet creatively.

What’s the biggest challenge you face as DJs?

Being our own worst critics! We’re both very particular and sometimes we need to remember that it doesn’t always need to be perfect and to just enjoy ourselves.

And what’s your biggest source of optimism or inner strength?

Each other! We’ve come quite a long way in a short amount of time and it’s been overwhelming at points, but having one another to lean on and celebrate the achievements with is kind of unbeatable.

Rosie: Our trip to Poland last year for Boiler Room’s True Music Forum was a big one. I got to take part in a panel discussion and talk about a music scene that I love. Through meeting some incredibly talented people there it inspired me to start my first club night, After The Jump. I’ve got four of my favourite Polish artists playing at The Waiting Room at the end of March, all UK debuts! You should come…

Nadia: Having Gilles Peterson guest on our Reprezent show as part of The XX takeover last year was pretty crazy!

What goals have you set yourself this year?

Keep learning, growing, bettering ourselves… and dancing! And we’re hoping to try our hand at some production stuff.

What’s your favourite party to dance at?

The Snap, Crackle & Pop parties at The Waiting Room are really fun. The bookings are always on point and it brings in a nice crowd. When the Rhythm Section parties were at Canavans, it was always a vibe. And very sweaty. This year we have to reach Cosmic Slop too!

For live stuff, you can’t beat Church Of Sound – nice people, beautiful music and the sweet potato curry is so good.

What’s your perfect party to play at?

A small, dark and intimate safe space with an open minded crowd, who are willing to lose themselves and experience new sounds.

Where do you get your inspiration from outside of music?

Rosie: The friends and family that surround me. I’m blessed to have loads of incredibly talented people in my life who are doing amazing things. It makes you want to push yourself even more! Oh, and Ru Paul’s drag race.

Nadia: I second Rosie on that. My family too, my brother is an awesome guitarist and songwriter and my mum exposed us to music from a young age. She’s an inspiration for sure.

What’s coming up this year for you that you’re excited about?

So many things! Dimensions is obviously a big one. We’ve also got Farr Festival to look forward too with Balamii and a few gigs outside of London and one abroad in the pipeline. Also there’s a few mixes coming up that we’re excited about. With each we are going to try and show a different string to our musical bow.

And finally, turning back the clock, what advice would you give to your younger self before you started pursuing music properly?

Don’t put so much pressure on yourself. Take things as they come and remember to enjoy it!